Faith Frank hired me, originally, based on nothing. She took me in and she taught me things, and more than that she gave me permission. I think that’s what the people who change our lives always do. They give us permission to be the person we secretly really long to be but maybe don’t feel we’re allowed to be. -Greer 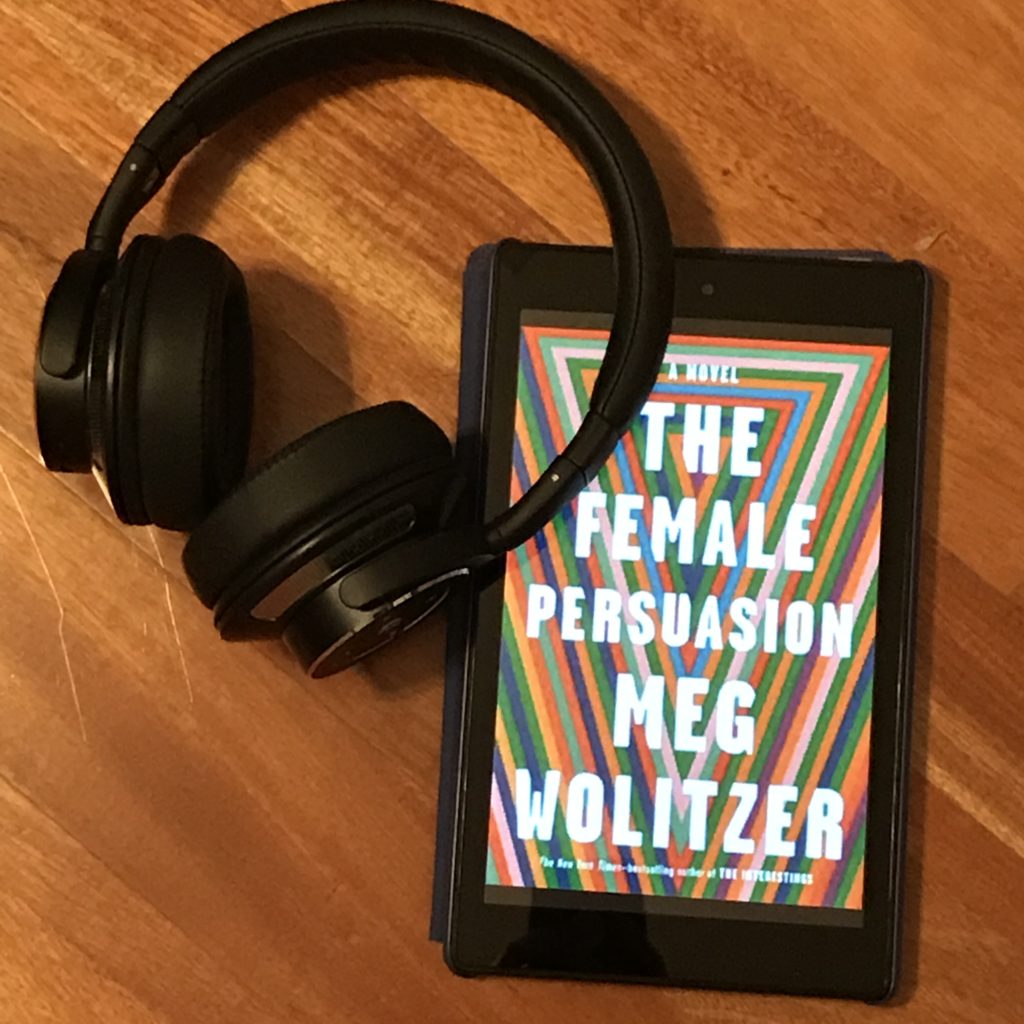 Synopsis
The Female Persuasion tells the story of Greer Kadetsky whose life turned out nothing like she expected. She was supposed to go to Yale and yet finds herself at the local college, Ryland, where a chance encounter with Faith Frank—feminist icon—changes the trajectory of her life. It is this meeting and subsequent relationship that provides Greer the scaffolding of the life she builds for the next decade, informing who she is as a person, providing her the job that starts perfectly yet leads her to a moral crossroads. Interspersed with Greer’s chapters are stories from her friend Zee, Faith Frank, and boyfriend Cory. In these we see Zee build her own life, independent of both her parents and Greer; how Faith became The Faith Frank; and what it means to love your family and do “women’s work” through Cory. Even without a Trumpian figure, The Female Persuasion explores, with a casual wit, how it feels to live with and navigate through current gender politics.

Conflicted
I listened to the audiobook of The Female Persuasion with conflicted feelings—I found the characters interesting, the dialogue between characters snappy, and the writing fresh. Told from several points of view, The Female Persuasion gave me points I could connect in most of the characters.  I could also understand why the major characters were making the choices they were making—which isn’t to say they made only good choices. Rather, Wolitzer’s characters stayed true to their development such that they made choices consistent with who they were as people. At the same time, I felt this niggling discomfort each time I turned the audio back on in that the book, while engaging, fresh, and snappy, also had a glaring hole in it. The Female Persuasion might more accurately be titled The White Female Persuasion. While this review will be centered around the almost exclusively white lens here, I want to be clear that this is still a book I enjoyed and one I’d read again. I don’t regret the time I spent on this book and the writing style and voice pushed Wolitzer’s prior book, The Interestings, up my TBR list. Because I think it is important to recognize the limitations of works we enjoy, this review will be more negative than usual, particularly for a book that I gave 4 stars. Essentially—this review focuses on what cost The Female Persuasion that last star.

I should also note that there are many people who knew me as recently as five years ago who will find this critique out of place coming from me. To be transparent in where I’m coming from—I’m a relatively recent arrival at the Feminist camp as a refugee from complementarian evangelicalism. I am not well-versed in the scholarship. I’m aware that the concept of intersectionality within feminism was introduced by bell hooks, though I’ve not (yet) read her works. There are things I may get wrong in this review or, more likely, my critique here will be necessarily somewhat surface level—both because I do not have the foundation to make this a true critical analysis and because you’re here to read a book blog, not a ten page seminar paper. I welcome any critique you have—any point you think I’ve missed—as well as any books you think I should read. The only comment that isn’t welcome today is a defense of White Feminism.

Limitations
So why do I feel like the The Female Persuasion is a story limited to a White Feminist perspective? There are, in fact, a few characters of color, though with one exception, they are typically limited to peripheral characters—at Loci for example, Wolitizer mentions at least one woman as being of color but that description is where the representation ends. These women do not engage in any dialogue in the scenes in which they appear that raises any points related to how women of color have experienced injustices differently, how their layers of race and possibly class have made their experiences of sexism different. The only character who could be considered a person of color whose viewpoint is directly presented is Cory—Greer’s boyfriend who is a first-generation American of Portuguese descent. (A quick Google search indicates there’s an ongoing debate about whether people of Spanish and Portuguese descent who are not from Latin America “count” as white or not. I’m not about to wade into this debate. For purposes of this discussion I’ll “count” him as being of color since he is presented as having what is typically considered the immigrant experience—his parents don’t always speak great English and work traditionally menial jobs, like housekeeper. He also changes his name from “Duarte” to “Cory” to sound less ethnic.) Zee is Jewish, though how this might have impacted her experiences with sexism doesn’t really come up.

As I recall, the only place where a person of color comes close to engaging in any kind of discussion about intersectionality is Zee’s African-American coworker, Noelle. When they first meet, Zee is in a Teach-for-America-esque program in Chicago. Noelle is, understandably, skeptical of Zee’s qualifications as well as her commitment. This one section from Zee’s perspective in conversations between these two women is where race becomes a topic. And yet, it is a topic removed from the larger feminist discussion. Zee fits into the larger narrative as a character study of feminism—she is an example of the plethora of Gen-Y woman learning to stand on her own in this “Man’s World.” Her experiences of moving across the country to start something new felt familiar to me, the way it will to many women my age. And yet, the way race is slotted into Zee’s story, it’s done in a way that manages to separate the discussion from Zee’s experiences as a feminist. The introduction of Noelle would have allowed Wolitzer to have even just one character voice what it is like to live as both female and black and yet this never really happened. Zee is the most minor of the major characters and Noelle a missed opportunity within Zee’s development.

My Life On the Road
This omission in The Female Persuasion was made all the more noticeable to me having just finished Gloria Steinem’s autobiography, My Life On the Road. Steinem discusses early in the book travels around India and learning about what community organizing looked like there. When the National Women’s Conference took place in Houston in 1977, she described the efforts expended before and during the conference to make sure that women of color had their experiences and voices heard, including working with various groups within others—for example of Chicanas and Puerto Rican women who both had much in common and unique needs and concerns—to make sure that women of all groups were represented in the compiled list of recommendations made by the conference. Even though I had not listened to The Female Persuasion yet, I was struck over and over by Steinem’s diverse experiences, her insistence on being where the people were, not being the leader, and deliberately including women of diverse backgrounds. While Steinem is by no means perfect, she is generally recognized as having values and positions that are deliberately inclusive of women of color and different classes. Though it started slow, I found her autobiography fascinating and worth the Audible credit.

So then back to The Female Persuasion. As I noted when I started, I enjoyed this book. I could see myself in Greer and Zee (though Faith seemed a watered down feminist icon to me after Gloria).   While the writing wasn’t particularly fancy or “literary,” it was snappy in the way my friends and I are when we get going. And yet, there is this glaring hole. For me, as a white cis-woman, I am not directly harmed by the omission of women of color, except to the extent that only seeing people like me means I’ll never be exposed to stories unlike my own. There isn’t anything that I noticed that was stereotypical or trope-y, women of color just aren’t really there.

Doing Better
And yet, like the catchphrase “silence is violence,” absence is a problem here. It is far too easy as a white female reader to never read a story featuring a woman of color. I can pat myself on the back for being a feminist and enjoying this feminist book and never realize that I’m only imbibing stories of White Feminism. It is easy to purposefully or even inadvertently avoid being exposed to the ways that race and class intersect with gender to make harder for women at these intersections. To an extent then, it is incumbent on writers and artists who produce art that appeals to women, like The Female Persuasion, to intentionally produce diverse works and for publishers to publish and market them. While it was far from a perfect book, Jodi Picoult’s Small Great Things strikes me as a good example here—many of the people who read mass-produced contemporary fiction like Jodi Picoult probably aren’t reading a lot of hard-hitting stories that discuss the ugliness of white supremacy and what it is like to be black today. And yet, Picoult knew she had a platform and Small Great Things was the result.

At the end of the day, I truly enjoyed The Female Persuasion and think it deserves much (if not all) of the hype it is getting. I look forward to seeing what Wolitzer does in the future and hope that in future books, she features more diverse stories and characters.